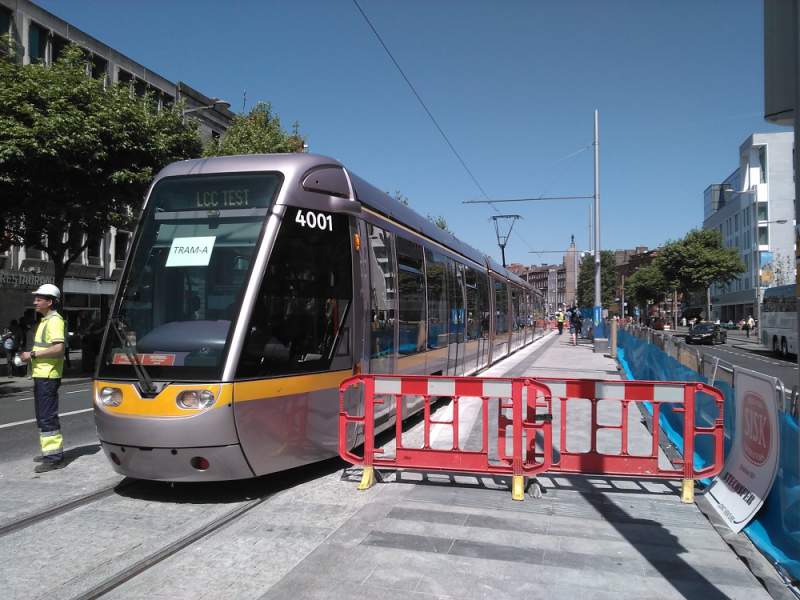 If someone looks at old pictures from Dublin there are always trams going up and down through places such as O'Connell Street, which was the departing point of many lines, or College Green, but as in most European cities, the tram succumbed to the ravages of the private car and disappeared completely from the streets of the Irish capital between the thirties and forties. However, towards the end of the twentieth century, the tram retook the centre stage and reappeared as a means of public transport as it was considered practical, safe and less polluting than a bus.

Until 2011 all what had been built was two lines, some extensions and the spur to Saggart, but the two existing lines remained unlinked, a fact attributed to the disruption that both, its construction and the passage of convoys through the city centre, with bottlenecks such as College Green, could generate.

However, the fact that the two lines are not linked has decimated the potential of the whole Luas system, since there is no network effect and most users only get the Luas if the point of departure and arrival are close to the line. Thus, it was concluded that the project was urgently needed and it finally went ahead under the Luas Cross City brand.

During the last three years the streets on the path of the new line, which is actually an extension of the current Green Line to Broombridge, have been dug and put upside down several times, firstly to remove all obstacles such as underground cables, pipes and cellars located under the pavement and secondly to install the rails, stop furniture, overhead lines, rebuilding the footpath and reasphalting the streets.

With so many trenches, fences, debris, noise of machinery and a long list of annoyances, these three years have seemed to be a never ending story, particularly for traders, who have been complaining repeatedly about declining sales due to the difficulty of access by customers to their businesses. But finally, this morning two trams have been spotted running through the central part of the route, which runs from Saint Stephen's Green to the top of O'Connell Street. In the afternoon the run will continue to Broadstone and tomorrow it will reach Broombridge.

This event is what for several weeks has been publicised as the Gauge Run, a test to verify that everything is working properly and that will be repeated tomorrow. During the autumn there will be more tests, which will be carried out more often and as if the trams were already in service, although without passengers, just to interact with the environment and fellow users of the road. It is expected that the Luas Cross City will enter into service at the end of the year.

Although this has just been a test, the event could be considered a historic milestone as it has been a long time since the last tram run all the way up O'Connell Street or through College Green. In relation to O'Connell Street it was on the 10th of July 1949 when a tram belonging to line 8 made the final journey from Nelson's Pillar to Dalkey and according to the then Minister for Justice Seán Mac Eoin, not even an escort made of 60 policemen was able to protect that last tram from damage by souvenir hunters.

In the end, the 31 lines that made up the Dublin tram network disappeared from the city landscape, but not completely as the buses that replaced them running the same routes retained their number and some of them, most of those between 1 and 31, have never changed it; it's the case of Dublin Bus route number 8, which still goes to Dalkey, as that tram that run for the last time back in July 1949.