Increase in journeys as users flock to public transport 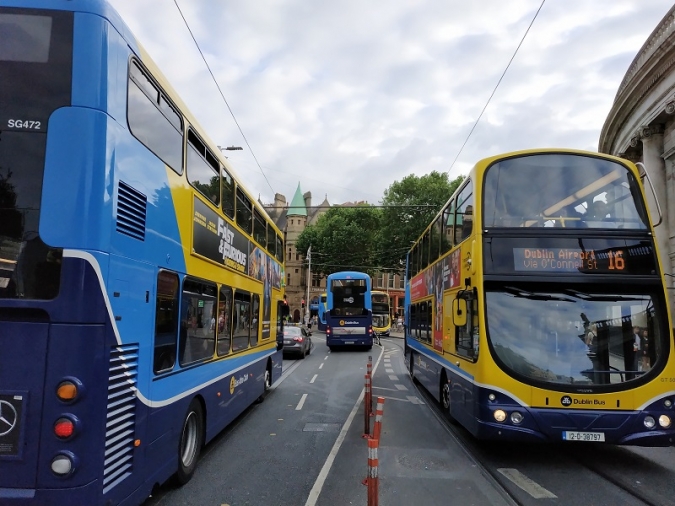 The preliminary full-year figures for each of the state-supported public transport operators were published today.

The figures represent seven straight years of increasing passenger numbers, with the percentage increase in 2019 by far the largest since the inception of the National Transport Authority. According to the Authority, the figures indicate a positive response from members of the travelling public to investment in public transport in recent years.

Bus Éireann posted a very substantial increase in passenger journey numbers with a jump of 14%. The company attracted 40.4m passengers in 2019 compared to 35.5m the previous year.

The performance by Dublin Bus has been very strong and once again the company provided the largest number of passenger journeys in 2019 at over 138m.

New timetables along with improved frequencies across their network have enabled Dublin Bus to continue to build passenger numbers on their services in 2019. This includes the new 24-hour services on routes 15 and 41, introduced at the end of the year.

While the company was operating fewer routes in 2019 than previously, overall passenger numbers on those routes rose by some 5%.

2019 saw a significant ramping up of Go-Ahead Ireland operations as a PSO transport operator and the company provided 13.9m passenger journeys during the year on routes in the metropolitan area. This represents an increase of approximately 24% compared to the same routes in the previous year.

These include brand-new routes such as the 175 that connects CityWest to UCD and newly-extended routes such as 33A linking Skerries, Swords and Dublin Airport.

Iarnród Éireann had a very good year with numbers on Dart, Commuter and Inter City services all increasing. In 2019, overall passenger numbers reached 50m for the first time in company history, representing an increase of 4.3% on the previous year.

Iarnród Éireann is continuing to benefit from economic growth and has seen demand increasing across the network. The figures reflect the first full-year benefit of the 10-minute DART services that were introduced in Sept 2018 and increased off-peak frequency on Maynooth, Northern and Phoenix Park Tunnel services introduced in December 2018.

Rail capacity is set to increase in the coming years to meet anticipated demand. To that end, an order has been placed for 41 new railcars for commuter routes, which will arrive from late 2021. In addition, the purchase of 600 new battery-electric / electric carriages is currently out to tender, and a contract is expected to be awarded this year.

Numbers on Luas increased by 15% to over 48m, in 2019. The figures reflect the first full-year benefit of the capacity enhancement of the Green Line, which involved a total of seven new 55m trams being brought into service in the course of 2018.

In addition, two newly-extended trams were brought into service in late 2019, with a further 24 trams to be extended in the next 18 months. Delivery of a further eight brand-new trams is expected to commence in Q2 of this year.

Anne Graham, CEO of the National Transport Authority said: “2019 was another year of strong growth for public transport in Ireland. The figures are a testament to the range and quality of services provided by our public transport operators.

There is no doubt that when there is a reliable, high quality, value-for-money public transport offering that customers will respond positively to it.

But people are also looking to the future of the planet, and they know that by choosing to use public transport, they are behaving in a way that will reduce emissions, improve air quality and protect their local environment.

None of us can rest on our laurels, and the priority now must be to deliver on those improvements in our public transport infrastructure that are provided for under the Climate Action Plan and Project Ireland 2040.

That is why it is so important for the NTA to continue to invest in projects such as MetroLink and BusConnect that will provide a better public transport offering into the future.

It is also why we are working to reduce emissions by investing in hybrid buses and electric trains and other clean technologies.”

The Minister for Transport, Tourism and Sport, Shane Ross TD, welcomes the publication by the NTA of public transport passenger numbers. They show a welcome nine percent  increase in passengers carried across public transport in 2019.

This increase is an important element in addressing Ireland’s climate change challenges, where the change from car to public transport is one of the best ways to reduce carbon emissions. The Minister added that the importance of continuing to invest in the public transport network is a key Government priority and the National Development Plan has earmarked €8.6 billion for investment in public and sustainable transport to 2027.

Minister Ross said: “These increased passenger numbers have been supported by the significant investments we are now making in expanding our public transport infrastructure. Last year we expanded PSO bus fleets and welcomed the first of the 26 extensions to Luas Green Line trams into service, while Government also approved the purchase of 41 additional rail carriages for the commuter rail fleet.

In 2020 we’ll continue to expand the size of the PSO bus fleet, extend existing trams Luas Green Line and also expand the Green Line fleet by 8 additional trams, while construction will commence on a new National Train Control Centre as well as an increased programme of maintenance and renewal work across the rail network leading to an improved passenger experience.”