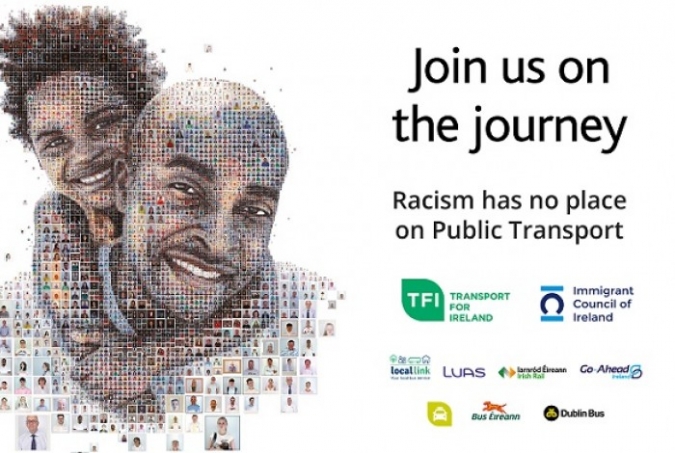 Picture made of selfies / Credit: Immigrant Council of Ireland

A new anti-racism campaign on public transport has been unveiled today featuring commuters from across Ireland who are standing in solidarity against all forms of racism.

Hundreds of selfies donated by passengers have been amalgamated to create a large montage representing diversity on the Transport for Ireland (TFI) public transport network.

Renowned collage artist Charis Tsevis developed the creative artwork which will feature in an advertising campaign that goes live today across digital and social media platforms and from Monday on bus shelters and on-board TFI public transport services.

From Tuesday 13th August to Thursday 15th August, commuters at Heuston Station are being invited to show their solidarity and take a stand against racism by donating a selfie to feature in the campaign and sharing on social media.

Brian Killoran, CEO, Immigrant Council of Ireland, said: “The best thing about this year’s campaign is the involvement of so many commuters, uniting to take a public stand against racism by donating their selfies. Racism left unchallenged damages society for everyone, not just victims, and the only way to overcome it is by joining forces to say we will not tolerate it.

This joint campaign with Transport for Ireland, transport operators and Dublin City Council, now in its 7th year, is a great example of people coming together to say there is no room for racism – on public transport or within society at large.”

Anne Graham, CEO, National Transport Authority, said: “Transport for Ireland is proud to be working with the Immigrant Council of Ireland in rolling out this important campaign. Racism has no place on public transport, and it will not be tolerated.

By standing together with transport workers and operators, we can celebrate the growing diversity within Ireland’s public transport services and ensure people of all nationalities are treated with the respect they deserve.

I would encourage commuters to show their support by dropping by our booth at Heuston Station next week and getting their picture taken for use in the campaign image. In becoming the face of the campaign, individual passengers can stand in solidarity against racism.”

Marcin Koriat, Bus Éireann, said: “Although I have experienced racism in previous jobs, I feel I am respected by more and more people who take the bus. Most of the passengers I meet day in, and day out are friendly.

There are some drivers at work who hear racist comments, which are upsetting and harmful. Everyone needs to understand that we are all the same and that we deserve respect. That’s why I think this campaign is so important. By standing together, we can put a stop to racism once and for all.”